Across the globe, general health has declined due to unhealthy eating habits, a sedentary lifestyle based on electronic media consumption, and the rise of chemicals and free radicals in our food and environment.

One of the most startling indicators of this is obesity. Obesity has exploded in the last 25 years, and represents a deeper problem with both the psychological condition of our societies, as well as issues with our current models of nutrition, food production, and consumption. Obesity is the reason that the current generation of children is projected to live a shorter lifespan than their parents. When we consider for a moment that obesity wasn’t even an officially acknowledged problem in 1970, the conditions of this challenge become more clear. The fact is that obesity is usually a condition that is created by the individual’s own lifestyle choices; it is preventable, and yet it continues to grow across the globe. 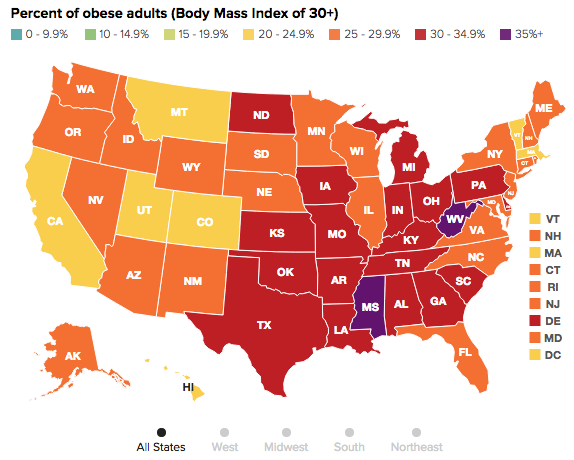 The State of Obesity: Consult this interactive map to see how obesity has exploded over the last two decades.

Just as Americans are suffering under their own weight, obesity gives rise to other deadly diseases which is linked to the excessive consumption of sugar. The American Diabetes Association released new research on March 6, 2013 estimating the total costs of diagnosed diabetes have risen to $245 billion in 2012 from $174 billion in 2007 2, when the cost was last examined. Diabetes is on track to become one of the most costly and deadly diseases in the country. Diabetes is linked to the proliferation of processed sugars in modern diets, particularly among young children. As preventable conditions like obesity and diabetes are exploding, medical costs are skyrocketing as well.

The United States spends more on healthcare than any other developed nation, and the costs only continue to rise. This spike in cost is a combination of factors, but can be primarily attributed to the rising cost of hospital care, advanced medical procedures, and prescription drugs. Yet despite how much is spent, the system is deeply flawed. In a 2013 Bloomberg ranking of nations with the most efficient healthcare systems, the United States ranks 46th among the 48 countries included in the study 3. Clearly the way we look at and treat health in America is deeply in need of a fresh look.

It is important to remember that health is not purely physical; health is a combination of our habitual thoughts, emotions, and physical actions that end manifesting in our physical health ultimately. The true source of health starts with how we feel, think, and act, on a daily basis. The statistics are showing us that deep down, modern societies have a psychology that is deeply unhealthy, and it is from this source that we continually make poor dietary, exercise, and lifestyle choices. In turn, this inner sickness manifests as the vast number of preventable conditions now arising in the population. Thus, we need a generation of healers and teachers who can show people how to attain happiness, health, and balance on a deep level. Only by addressing our health at this fundamental level can we transform health at a global scale.